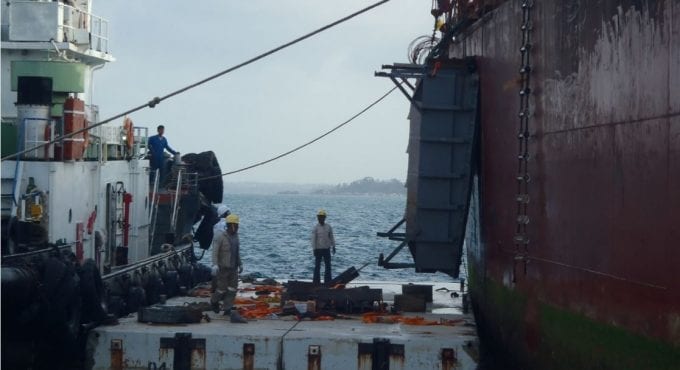 A 300m cargo ship was fully laden with iron ore when she suffered significant damage to her hull structure following a collision in the Suez canal. The ship continued to Singapore however the resultant draft and trim meant there was too much risk in continuing passage to the final destination in China. Dry docks were not a viable option due to the location and condition of the vessel.

SeaTec assessed the feasibility of an afloat repair. The key challenge was the extent of damage combined with the technical and operational constraints at 20m depths. In addition, environmental conditions would prove testing, with a combination of strong tides, poor visibility and a heavy sea state.

SeaTec designed two cofferdams, which were subsequently built by a local yard in Bintan. These were both sizeable, the largest being 5.5m x 3.5m. The dive team templated the damaged areas and the cofferdams were refined accordingly. They were transported to the ship via a barge and positioned in place with rigging and diver intervention.

The cofferdams were temporarily attached to the hull with underwater welding to establish a ’soft’ seal. A hydrostatic seal was achieved following dewatering. This allowed engineers to enter the damaged area, perform internal repairs and secure the cofferdams to the hull more firmly. Once completed to the satisfaction of the superintendent, the vessel transited, with the cofferdams in situ, across the South China Sea to it’s destination port.

In this section you can stay up-to-date with the latest news from SeaTec, whether it’s updates on our services or commentary on the maritime industry.

Talk to one of our team

Call or Email Us