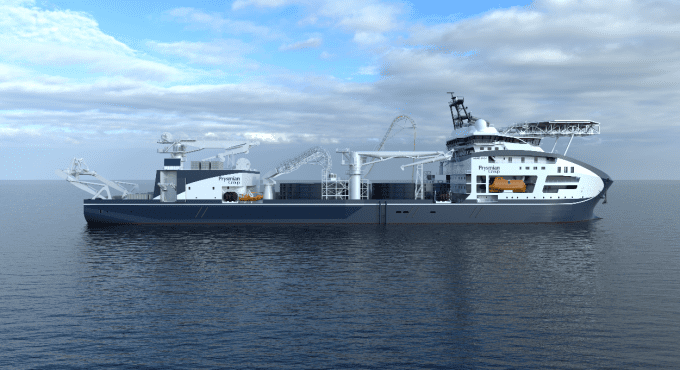 Contract for new build is the biggest in SeaTec’s history

SeaTec has announced the signing of a major new contract with Prysmian Group for the new build supervision of a cable laying vessel, the Leonardo da Vinci.

The cable layer, which is a DP3 vessel designed to lay underwater cables for telecommunications and power transmission in both shallow and deep water, is being built by Vard, a Fincantieri company. Measuring 171 metres long, the new flagship vessel will boost Prysmian Group’s submarine cable operations, while supporting the company’s long-term growth in the submarine cable installation industry. The hull will be built in Tulcea in eastern Romania and towed to Brattvag in Norway where the outfitting will take place, along with trials for the delivery to the vessel’s owners by Q2 2021.

In May, SeaTec attended the steel cutting ceremony in Tulcea where the first steel plate for the vessel was cut, marking the official start of the vessel’s build. The same day, the kick off meeting was held with the construction yard where SeaTec already had an established presence as site supervisor prior to the deal’s completion in June. Going forward, the new build supervision will be managed by a SeaTec site manager supported by skilled resources, including a team of inspectors covering all fields of ship construction, to ensure that the work is completed on time and to according to the best ship building standards.

In September, the keel laying ceremony took place, which is another important milestone in the vessel’s construction. A traditional landmark dating back hundreds of years, the ceremony involved the lowering and lining up of the first modules of Leonardo da Vinci into place while the employees working on the vessel looked on.

The client has been hugely positive about SeaTec’s involvement and about the new build in general, noting that a number of innovative design features will make Leonardo da Vinci the leading vessel of its kind. Sebastiano Aleo, Head of Submarine Systems Installation in BU Projects at Prysmian Group, said after pushing the button to start the laser cutter: “Leonardo da Vinci will be the most advanced cable laying vessel in the world: it could not be otherwise, since it is the result of the cooperation of Prysmian and Vard, two global leaders in their respective industries.”

The contract with Prysmian Group is the biggest ever signed by SeaTec. Davide Leoni, Director of Projects & New Builds at SeaTec, said: “We are delighted to be partnering with Prysmian Group, the largest electric cables manufacturer in the world. It is great news for SeaTec and V.Group and reinforces our status as a leading provider in ships new build supervision.”

Prysmian Group. V.Ships Offshore is currently managing three Prysmian vessels and V.Group aims to bring this state of the art vessel into ship management after delivery.

In this section you can stay up-to-date with the latest news from SeaTec, whether it’s updates on our services or commentary on the maritime industry.

Talk to one of our team

Call or Email Us